They starting making cameras in 1937. After WWII they produced LTM lenses for the Leotax cameras … the Topcor lenses have a reputation as being some of the best LTM.

35mm, TLRs were also produced after the war. The Topcon brand first appeared in 1953, and produced a 35mm SLR in 1957 … before Nikon or Canon. The Topcon RE Super was the first TTL exposure metering SLR.

Exported Topcon SLRs were also rebranded under the Beseler and Hanimex name. Camera production stopped in 1981. K.K. Topcon concentrated on specialized optical equipment after that time.

Soooo, I have collected some more TLR’s. In hunting for some broken cameras I came across a Yashica Mat 124G, and it happened to be accompanied by a broken baby … the Yashica-44. 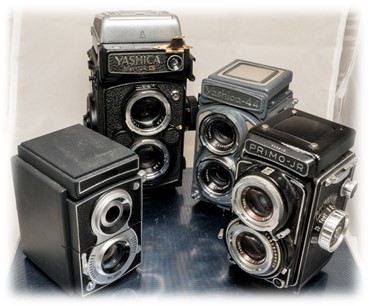 The Seller was kind enough to throw in another 4×4 TLR that was also not working and also a TLR pencil sharpener.

As you can see the 124G has got some alien finder hood attached to it.

The Yashica-44 was modified for 35mm film so it is missing a roller.

With the exception of the pencil sharpener, all three cameras have some sort of problem with shutter release or stuck winder.