I was a little hopeful that I would be able to get this one working based on the description of the item before I purchased it … well, I was too hopeful. This is still a cool looking camera to add to my collection, and it is a Graflex !!

The lens is removable so that made it fairly easy to clean. Just pull off the U clip from the back of the lens … then push the lens forward until it can be pulled up-off.

Access the interior lens elements by screwing off the ring in the back and unscrewing the front cell.

There was some slight haze that was easily cleaned off.

Now the main problem with this camera was the shutter. I was anticipating that the shutter curtains were torn … but it appeared that at least the rear curtain was intact. I was able to turn the winding knob and saw that the front curtain was also intact … but the shutter winding would not stay cocked.

Time to open it up …

First remove the hood by removing the four screws at the corners.

There will be a clamping bracket under the screw that also come off. 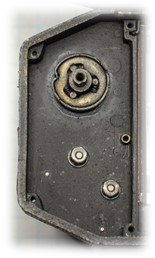 I removed the plate on the left side and figured out that it is not necessary … but I will show you anyway.

Remove the screw on the rewind knob and remove.

Remove the screws that hold the plate on.

Now on to the right side

Remove the screw from the film counter dial. Pull off the dial. Remove the pointer arm.

Remove the screw from the shutter winder dial. Pull off the dial … note that there are multiple parts within the dial.

Remove the screw from the Bulb switch and pull off the little arm.

The mirror set lever has a screw and bolt through it … unscrew both.

Remove the four screws that hold the plate off.

These are the parts for the winding / shutter speed setting knob (including the gear that sits under the plate).

Not much here … and I did not find any info on the web to help me figure this out … so I moved stuff and guessed.

The golden gear at the bottom of the image (that sits under the winding knob) appeared to be the cause of the problems.

I can turn it to cock the shutter, but it would just freely wind back.

I pulled it off to take a look at what was happening underneath. 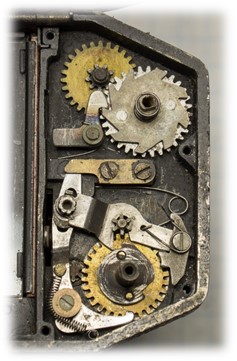 Ok, some more turning and guessing.

The gear underneath is responsible for moving the front shutter curtain. It was locking in place fine.

The gear that I removed (that was on top of it) is responsible for the rear curtain … and also locks it in place.

The toothed lever on the bottom looks like it locks the top gear. 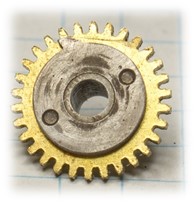 Looking under the top gear … I can see that the tooth was worn down, so it no long could catch.

I would have to either mill a new part (I don’t have a mini milling machine) or get a replacement part.

Hopefully this will be of help for anyone else that is going to tackle restoring one of these … this one is sitting with the rest of my camera collection.

Ok, I have decided to put the Yashica Mat aside as it was becoming much more of a job than I expected. Too many locked screws, broken screws, and damaged mechanism … and anyway I received a new camera today.

Yes, it is a name that we all know well … at least for those of us that delve in the large and medium format. The picture that most people have of a Graflex camera is seeing all those press dudes in the 30’s running around with their Speed Graphic camera’s.

Originally founded by two Williams … Mr. Folmer and Mr. Schwing, under the company name Folmer & Schwing Manufacturing Company. Initially the company made gas lamps and bicycles, but for some reason they choose to make cameras after the gas market declined … some references say that they wanted to make cameras mounted on bicycles.

They produced the first Graflex reflex camera in 1896. The company was then acquired by George Eastman and became known as Folmer Graflex. In 1926 Kodak had to give up the Folmer Graflex division, and this became the company we know as Graflex.

Obi-Wan Kenobi’s lightsaber was actually the handle from a Graflex 3-cell flash gun.

The camera I now have in my possession is the National Graflex series I.

The National Graflex camera was first produced in 1933 under the Eastman Kodak, Folmer Graflex division..

The camera is printed with “Graflex, Inc. Rochester, NY, USA” . The name National Grapflex appears on a plate located on the back of the hood. Mine says SERIES II, but all references to the II show that it has a sliding cover over the ruby window.

This camera folds up into a neat squarish metal box. This is a sling lens reflex camera, medium format 2 ¼ x 2 ½. It was called the “Single-Lens Model”. There must have been a couple of variants of this model, as I have seen some with a swing flap to cover the ruby window … or possibly that someone modified the camera.

Once opened the camera appears to be a mini Graphic type camera.

Open the top flap and there is a fold out hood with all the control dial.

The shutter speed dial has numbers from 1-9 printed on it. The key to figuring out the exposure is done from a nice chart under the top plate that has a slider to match up the Time of Day during each month to figure out the exposure depending on the Description of Picture … no need for a light meter, though I have no idea what film speed that chart is designed for.

The lens is removable to facilitate cleaning of the mirror and the insides … the series II model was a interchangeable lens model and offered a 75mm and a 140mm lens.

This particular camera has a busted shutter and a foggy lens. I think the rest of the camera is OK, but I will not be sure until I get the shutter working … oh, and this camera belonged to “Uncle Al” based on the tape stuck to the bottom plate. 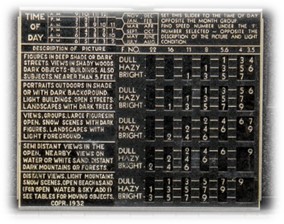 I forgot to add in the super duper exposure calculator

Just figure out what date/time it is, move the slider, and choose the subject type … and now you have your exposure.