Sadly, this Balda Baldinette came to me in almost perfect condition … the only thing I had to do was clean out the viewfinder port and give it a shine.

First thing to do is to remove the rewind knob … just unscrew it.

Then remove the film counter while holding outter knurled ring.

The four screws hold the top plate on … remove them and then lift off top cover. You can go inside and clean out the viewfinder ports.

Under the cover … as this is not a rangefinder camera there is not much here … you can clean counter dial and red dot.

If you do want to get into the shutter, I noticed the focus distance ring would need to be marked to reposition it correctly when you put it back on.

Even though the info says that Balda made “cheap” cameras, he didn’t make them cheaply made … though the shutter/lens was commonly on the low end of the scale.

The Baldinette was made in 1950. It was a viewfinder 35mm format folder … all metal body, and pocketable like the Retina. It was also made in a red leather version.

Typical of the cameras of those days, different shutter/lens combos were available. The one I have has a Pronto shutter that doesn’t have that many speeds, B and 1/30 to 1/300s so it really is a daylight camera … though it does have a hotshoe and a PC port … and the Schneider Radionar 50mm f/3.5 (triplet) lens.

… the camera is advanced enough to have a safetly lock on the winder … the counter will only advance if there is acutally film advancing within the camera and there is a manually push button that needs to be pressed after each exposure to unlock the shutter release button.

The one I got a hold of is in working condition, everything still feels as mechanically sound as when it was produced over 60 years ago. 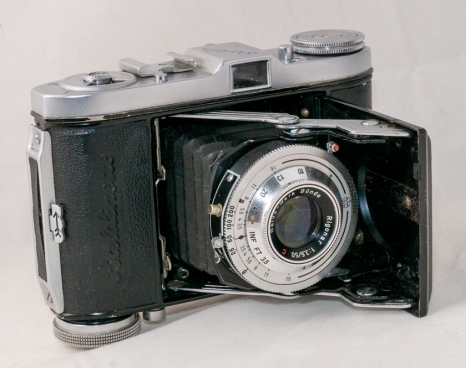 Max Baldeweg founded Balda-Werk in 1908. His first factory was in Dresden Germany. He was making inexpensive 35mm and medium format folding cameras for the mass market, and he also  made for others to rebrand.

The first was the 1935 Baldina … kinda looked like the Welina and Retina … and he continued on that trend, hey whatever works (sells).

In 1946, Max fled to West Germany. The factory in Dresden, East Germany, was nationalized and in 1951 changed the name to Belca-Werk. He started again with Balda Kamera-Werk located in Bünde … and continued on where he left off.

You will find many of these Baldxxxx cameras, including some 126 and 110 cameras … that somehow avoided being named Bald (and some of the early box cameras).