You never know what you’re gonna to get.

My last surprise was the Ricoh Wide.

The new surprise … to me it was just another broken camera that was able to pickup cheap and put back into working condition … was another Mamiya Six that I got last year.

Welllll, it appears that it was not just any Mamiya Six … it happened to be an uncommon version of the many variants that were made.

I like to make sure I describe my auctions accurately so I do a lot of searching on the web. I listed the camera as a IIa version and was questioned by Don@eastwestphoto … I did agree that it was unusual to be this version, and there was only one reference to a IIa by Dirk Spennemen but Don has not seen any other references that it did actually exist. After some discussion back and forth he figured out that I actually had a 1942 Mamiya Six IIa.

“Its a very late model lla = tear drop exposure counter, three screws in acc. shoe, f/22 on DOF scale, two strut rails, round front larger standard for a 00 shutter. Known lens & shutter of the period 1944, its a WW2 booty camera, they were never imported in the USA. Quite RARE ***** star rating in Sugiyama’s 1984 collectible Japanese camera book is for model ll, lla is even rarer! . I just found a reference to a model lla, I think maybe you are correct?”

Don has a new addition to his large Mamiya Six collection. 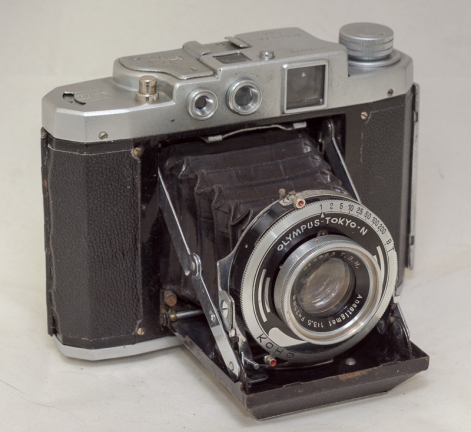 There was one particular “tool” that I mentioned that could be one of the most important ones to have … or have access to … and that is a friend who has a machine shop.

I had completed the work on the Mamiya Six some time ago, but sadly the camera came to me with a missing part … one of the film spool supporters.

I thought, hmmm, possibly my awesome friend Craig could machine a new one for me … and that’s what he did. 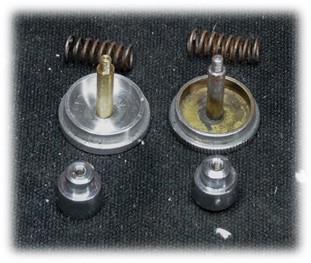 The old one is on the right.

It’ not an exact replica, but I was not expecting that, just something similar.

Hey, it works … and looking almost like it’s original is a bonus !! 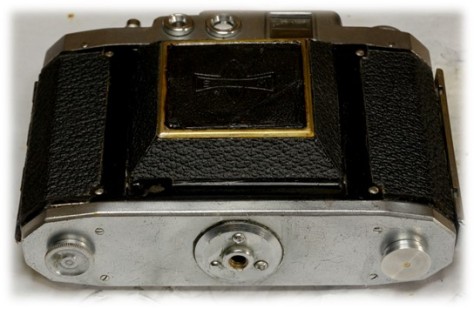 This Mamiya Six came as needing some cleaning.

The first thing I noted upon receiving the camera was that the remaining leather covering needed to be removed … which is too bad as it is embossed with the Mamiya labeling. The bellow were fairly worn in the corners and had some yellow mold growing on it. Time to strip it down and completely clean it.

The first thing is to take off the lens. Open the back and use the spanner wrench to loosen the circular retaining nut.

Open the front to extract the lens.

Continue to unscrew the circular retaining nut and then pull the lens off.

The lenses looked fogged so I had to take it apart … and also it give a good opportunity to clean out the shutter gears.

The front cell has an outer cover. Loosen the screw in the side then pull it off.

The front cell can then be unscrewed counter clockwise.

Use a rubber tool to unscrew the front element. You can now clean these.

Flip the shutter over.

This image shows the front cell (in the upper left). 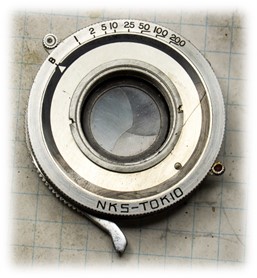 To get at the shutter gears … unscrew the thin retaining nut.

Pull off the cover. 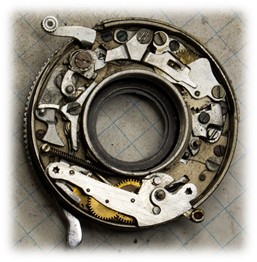 The lower set is the self timer.

The set in the upper right is the slow shutter speed.

Put some Ronsonol on everything.

Exercise the shutter and aperture.

You can clean crud off the shutter and aperture blades.

Put it back together and set aside. 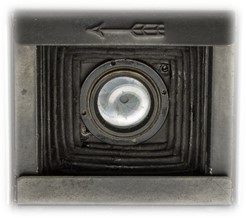 The film/focus guide moves in/out with the focusing.

It is held in by two tension springs.

Pull the film guide out at the top. You will be able to see that the springs are clipped on.

Gently pull the spring off the clips.

Clean out the back.

The bellows is held onto the body with four retaining clips that are accessible from the back. It is also glued to the the body. Carefully separate it from the inside … don’t just pull it off. 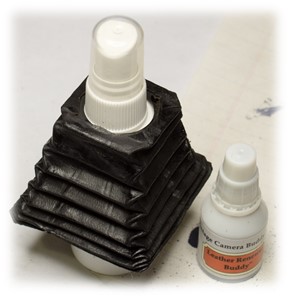 I examined for light leaks using a flashlight … inside and outside.

The leather was quite worn so I used a tincture that worked quite well on blackening and also conditioned the leather so it was softer.

Maybe I should have used the tincture first before fixing the holes. 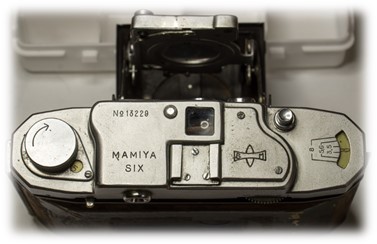 Now lets look inside the top.

The winding knob is removed by unscrewing it counter clock wise.

Take off the single screw to remove the cap.

Four screws around the outer edges need to be removed in order to pull off the top. Flip it over and clean the inside.

The counter dial on the left can just be pulled off. There is a spring underneath it.

Turn the focus dial and note how everything moves.

The lens release button and the shutter button are not secured to anything so you can just pull them off.

Clean the mirror, silvered glass, and all other things up there including the red exposure warning arm.

Put the top back on.

Clean out the front door and mechanisms.

Glue the bellows back on and put on retaining clips.

Screw on the front shutter/lens.

Put the film/focus guide back on.

I stripped off all the old leather … the front square piece has the S M logo on it so I made sure to keep it as intact as possible. 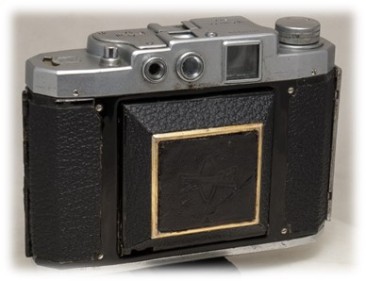 I put new leatherette on the body … I recommend  semi soft leather / leatherette as there are curves/bends in the body. I shined up the rusty chrome metal on the front which reveals the brass underneath … I did not do this for the rest of the body so I left the rust there.

Yeah the S M leather piece doesn’t exactly fit with the leatherette, but it needed to be there.

Sadly my Mamiya Six is missing two parts … one the springs holding the film/focus plate is missing and one the knobs on the bottom (to release the film spools) is also missing.

I figure I can make a spring but the knob is something I cannot reproduce.

Time to find a parts camera to complete it.

Mamiya Koki Seisakusho (Mamiya Optical Works) was founded by businessman Tsunejiro Sugawara and engineer Seiichi Mamiya in 1940. The S M company logo was designed by students from the Japan Fine Arts School … which is still the same used today.

The first camera they produced was a folding medium format with an odd focusing mechanism … the lens did not move … the film plane does!!! Another oddity was the fact that this was the only camera they made for the first 8 years. They started producing their own shutters and lenses in 1947 and added new products like a TLR, submini and 35mm SLRs. In 1950 the Sekor lens name appeared. In 1957 they looked outside the box again and made a 35mm rangefinder with interchangeable backs (the Magazine 35) and an interchangeable lens TLR, (the Mamiyaflex C).

I cannot resist medium format folders … and this one is really cool. This has a coupled rangefinder using 6×6 film format.

The focusing is done by moving the film plane, instead of the lens.

About 13 versions of the Six/6 were made. This type III introduced in 1942 and was made throughout WWII and later. My Six is a pre-war version.

The one that I just got needs a LOT of cleaning and it appears the focusing mechanism needs repair … I think there is even mold growing on the leather bellows !! Looking over the camera and especially the screws, it appears that this one has been taken apart before.