Made by Tokyo Kogaku in 1958 is reportedly the first Japanese copy of the Baby Rollei. The Primo-Jr is a 4×4 TLR using the 127 film format. It was made only in black. It was exported to the USA under as the Sawyer’s Mark IV.

Unlike most 4×4 TLR’s, the Primo-Jr has a bright f/2.8 taking lens … and some will say it is better IQ than any other baby Rollei.

This little guy came to me with a stuck shutter/winder … now, being someone who has tinkered with many TLR’s in the past I thought it should not be a problem to fix this one … so I started researching disassembly. It appears that there is no info on the web from anyone taking one of these apart.

So I tackle the front.

The “leatherette” material on this camera is brittle so it will just flake away … no chance of re-using the material.

There are four screws that hold the front plate on.

Set the shutter speed to B and set the aperture to f/2.8. This will make it easier when you put this back on to fit the pins underneath. 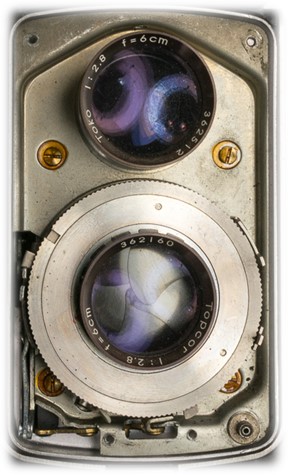 Not much to see here.

You can clean out the shutter

The four large screws hold the entire front assembly to the focus rails. If you take them out then you can remove everthing.

Ok, now for the winding side.

Scrap off the material.

You will see from my image where the five screws are … do not remove them yet.

Push the pin out for the winding arm to remove it. Remove and put aside the two screws.

Pull out the middle plate.

There are two spring pressure things on either side … so be aware of the springs underneath.

There are two spring pressure things on either side … so be aware of the springs underneath.

Remove the five screws and unscrew the counter reset knob, then remove the outer plate. 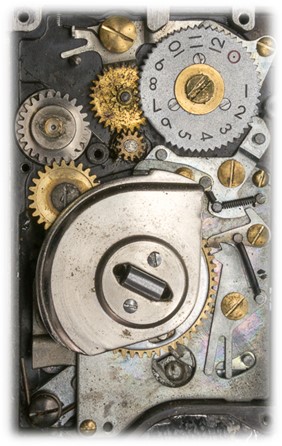 Now you can see all the gears … and you can see the reason for putting the two screws back into the middle.

At this point I still had issues with the winder being stuck.

I fixed a gummed up shutter button with Ronsonal but that did not fix the problem.

Then I started thinking … and it came to me … Read The F@%king Manual.

1. Do not move the Exposure Counter Activating Button (15) when the camera is empty.

2. In case the Shutter Release Button (10) or the Film Winding Crank (13) becomes jammed on an empty camera, open the Back, remove the Film Take-up Spool and turn the gear with your finger tips until the Film Exposure Counter advances to ZERO mark .

Soooo, I did that … and now it is working.

Remember boys and girls, the first thing you should do is understand how the camera should be properly operated before thinking it needs to be repaired.

They starting making cameras in 1937. After WWII they produced LTM lenses for the Leotax cameras … the Topcor lenses have a reputation as being some of the best LTM.

35mm, TLRs were also produced after the war. The Topcon brand first appeared in 1953, and produced a 35mm SLR in 1957 … before Nikon or Canon. The Topcon RE Super was the first TTL exposure metering SLR.

Exported Topcon SLRs were also rebranded under the Beseler and Hanimex name. Camera production stopped in 1981. K.K. Topcon concentrated on specialized optical equipment after that time.