The Rollei 35 is not all that difficult to disassemble, that is after I guessed at what to take apart … though putting it back together is a different story. My main purpose for the fix is to figure out what is jamming the lens mechanism. 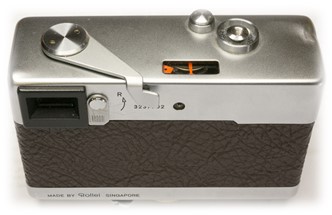 The first Remove the top plate

Unscrew the winding arm cap. There are two washers underneath. Remove the three screws holding the arm on. Pull off arm.

Remove screw from rewind release. The shaft is held by tension spring wire – turn it the so the flat edge can pass by the wire, then pull it out.

Turn the camera sideways while pulling off the top plate … you will probably have to wiggle it on the viewfinder side first. Note that there is a small slider pin and washer underneath/within the shutter button and it may fall out.

If you are not taking out the viewfinder, put the winding arm screw back on to keep the winding gear from falling out. if you do want to pull it out, then put two marks on the big gear to register its position. 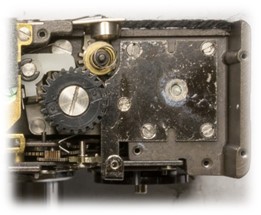 If you want to pull out the viewfinder (which is not actually attached to the camera), first take off the large winding gear and the bits underneath. Then unscrew the plate and remove it.

Note that there is a spring arm attached, that keeps the winding mechanism under tension (this tension is used to pull the winding arm back).

The viewfinder is housed in a plastic case. You can get in between first two viewfinder lenses, so it can be cleaned without removal.

Put this all back together. You will probably have to fidget a lot with the spring to get it under tension … just be patient and it will happen.

Then (as I mentioned earlier) put the winder cap screw on the large winding gear to keep it from falling out.

Unlock and pull off the back of the camera

Now we need to take the front of the camera off. Luckily, the leather is not the flakey leatherette material … so the first thing to do is to neatly peel back the leather in the front corners to get access to the four screws that hold the entire front plate on

There is a differential arm on top that slides behind a screw, so you will have to remove screw. There is also a spring under tension between the arm and the upper body, so pop one end off. 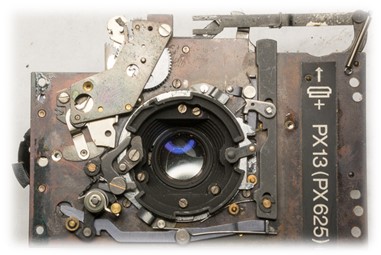 Now you can pull off front and look at the back.

The back is filled with gears, arms, levers, do dads, and thinga majigs, that couple everything together.

The shutter gears are also here.

In my poking around I found that there was a loose screw jammed close to the shutter speed mechanism (you can see it at the 10:30 position). When the screw moved around it would get caught by the lens as it is extended, and also would stop the lens from rotating. I never did figure out where that screw actually originated from.

Ok, so now put it all back.

For the dent that I had in the top plate I used a hammer … no, not directly against the metal … I placed the plate on a hard flat wood surface, then I used a bamboo chopstick (from my local famous Chinese Food restaraunt) to use as a punch. Work softly and continuously move around … patience Danielson … and eventually you can get to an acceptable flatness.

This site uses Akismet to reduce spam. Learn how your comment data is processed.